A reader asked us if we could provide some insight into the Columbian Rolling Chair Co, and indeed we can. The venture was HUGE by 1893 standards. The company running the operation grosssed nearly $400,000 during the six months of the fair. As a comparison, the Ferris Wheel generated a bit over $700,000 (of course it didn’t open when the fair did, so that wonder of the Expo generated nearly 3/4 of a million dollars in just four months).

Still, one would expect to see big dollars from the centerpiece of the Midway, but from a fleet of wheel chairs? Also, it’s good to look at fair concessions in present-day dollars to focus more clearly on how we seem them in the perspective of our own world. 1893 dollars generally are multiplied by 20- to 25-times to present a picture in “today’s dollars.” Naturally, the cost of living, world’s fair expenditures and what fairgoers had in their collective pockets in 1893 is more complex than this formula. Still, use 25x and the Ferris Wheel’s 50-cent admission cost would be $12.50 today; I’m not sure about other cities, but a ride on Seattle’s waterfront Big Wheel can’t be had for “only” $12.50. Admission to the WCE, likewise 50 cents, would also become $12.50 and you surely won’t attend any major event for that in 2017. The most expensive attraction at the fair was the $2.00 fee for a ride aloft in the captive balloon or $50 in 2017 dollars. Here in Woodinville, WA, we have some spectacular options for hot air balloon rides–and a lovely morning flight will set you back almost $200.

So if you’re looking at prices at the fair versus today, while it’s difficult to compare to our costs in the 21st century, remember that in 1893 disposable income was the purview of the wealthy and spending a dime or quarter for an attraction on the Midway or paying $1-$2 for a room per night in Chicago was absolutely NOT small change.

That’s a long preamble to the rolling chair story because the Columbia Rolling Chair Company generated a million dollars in revenue in today’s dollars and the rolling chairs were pricey, to say the least.

The company employed hundreds of college students as attendants who were happy to get work for the summer. I suspect that college students were selected because the company assumed they were generally more responsible than just unemployed laborers. Still, there were the occasional complaints that attendants thought racing one another with their guests in the wheel chairs was great fun, as were rides said to be too fast and too bumpy; but the complaints were minimal over the course of the fair.

The attendants wore snappy-looking uniforms, not unlike a train porter or even the Columbian Guard, the police force of the fair.

The wheeled vehicles were much like a medical wheel chair at the time, cane seats and high backs, designed only for someone to “push” as opposed to riders manipulating the wheels for themselves.

The rolling chairs were available throughout the 600+ acres of the main grounds that stretched from the stock pavilions at the south, through the various lagoons to the Fine Art Pavilion at the top of the waterways and beyond to state and foreign buildings farther north. East and west, it was from Lake Michigan, through the major buildings, around the lagoons and to the Horticulture and Woman’s buildings at the west….and on to the mile-long Midway. 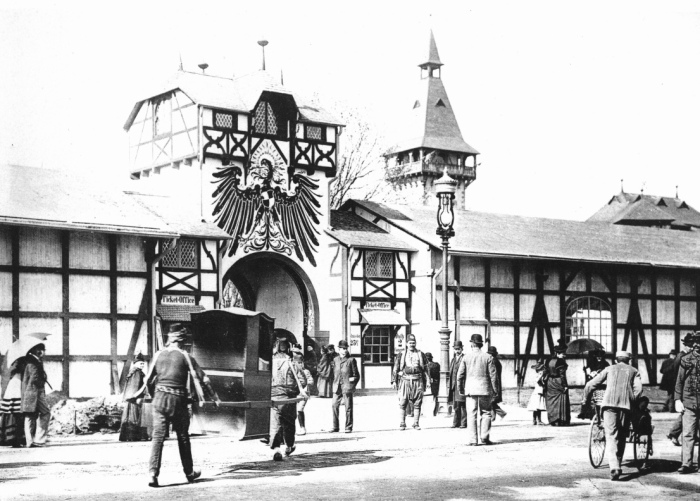 Above, on the Midway, two attendants carry an empty sedan chair–a heavy load even without a passenger; at the far right a uniformed rolling chair attendant pushes a customer.

Attendants with their chairs were situated everywhere and anywhere. Someone tired could buy an hour or two, being pushed, or for less money having a spouse or child do the work. The cost was 60 cents for an hour with an attendant–$6.00 for a full 10-hour day on the grounds.

We have no way of determining what percentage of rolling chair users employed an attendant, and if so, we’d guess there was a tip added on at the end of the shift or day. But it seems to have been very common for fairgoers to have rented the chairs sans attendant. In our new book, The Grand Midway, we used excerpts from multiple diaries and letters and one diarist, who visited the fair some FIFTY times in its six-month run, commented once that her parents and many friends got together for the evening on the grounds “and we got a chair for mother and took turns pushing.”

As a footnote to the rolling chairs, there were other options available for the weary visitor–a sedan chair carried by Turkish attendants, a small “cab” like a phone booth atop two long poles carried front and back by the attendants. Those were generally quite short rides, due to the heavy labor–from one location to another on the Midway, or just around an area of the Midway for fun rather than getting anywhere.

And in a similar vein, camp chairs were rented for guests who wanted the option of being able to stop on a whim and sit a while, without worrying about finding an open chair or bench. We’ve never unearthed details of the camp chairs, which we assume were canvas-seated folding, lightweight contraptions. We did once locate a ticket “good for twenty five cents if returned accompanied with chair in good condition to any camp chair booth this day.”

View all posts by normbolotin

One thought on “Rolling Around the Columbian Expo”