Welcome to the World’s Columbian Expo Journal. For those who have read either of our books on the history of the fair, you probably read about what sparked our interest in the 1893 fair.

We—partners in The History Bank, Norman Bolotin and Christine Laing—were working together as editors and had written a variety of material, but as of the late 1970s had not yet written any books.

FYI: Throughout this blog, when you see the first person “I” it will be Norm writing. Otherwise “we” is from collectively The History Bank.

Both of us were young and very enthusiastic visitors at our local world’s fair, the 1962 Century 21 Exposition in Seattle. By the time the seventies rolled around, we were beyond ankle-deep in studying and collecting material about all world’s fairs, including the World’s Columbian Expo. But it was at a Seattle coin show in 1979 that Norm discovered an amazing high-relief medal in the original box from 1893. Without much knowledge about such items from Chicago, I purchased it because of its amazing beauty and condition, as well as being found in a virtually new original box from the fair.

That was the key to opening the door to research about the fair where this medal had been sold as a souvenir. A decade or so later, I had built a reputation in both writing and collecting circles as an expert on the WCE when we the National Trust for Historic Preservation asked us to write and produce a history of the WCE for the fair’s 1993 centennial.

The book was produced in a limited-edition (150 copies at $150) and a hardcover edition. The limited-edition sold out immediately to readers of the Trust’s magazine. It was leather-bound and came in a slipcase with an 1893 U.S. Columbian half dollar in an inset. The book also included a limited print from the fair, numbered to coincide with the number of the book.

In 2002 the University of Illinois Press reissued the book in softcover, which is still in print and available from the press, bookstores, Amazon—and The History Bank. 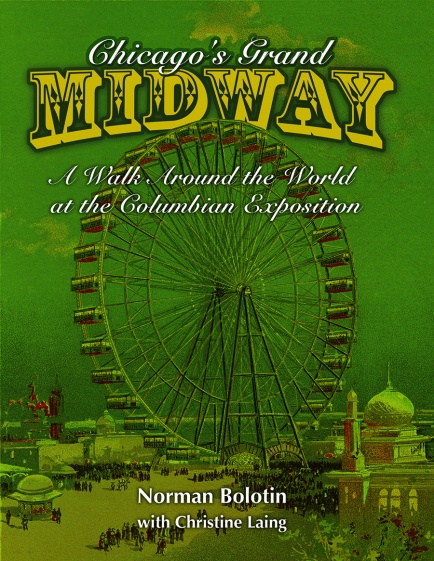 Our second book about the fair was nearly twenty years in the making. I researched the fair intensely between the publication of the first book in 1993 and the 2017 publication of The Grand Midway which coincided with the launch of this new site in June 2017.

We are also establishing The History Bank as an online bookstore at the same time. We will sell copies of these books along with an outstanding library of WCE books published in 1892-1894. As part of our ongoing Columbian research, and our sale of items from the fair, we began an internal inventory of materials as we were preparing the launch of this blog.

It was a little shocking to discover we had some 9,000 digital photos from the fair in our files; that is not to say we have 9,000 separate subjects represented, as we might have 2,3 or a half dozen photos of a Columbian medal or a trade card, for instance.

We also have an extensive library of magazines and other periodicals published in 1892-1893, as well as guides and hardcover histories and references from the fair.

We have not announced a long list of specific articles that will appear here, as we intend to develop topics as questions and comments appear. We also will have small snippets of information and photos which we hope will be of strong interest to blog followers. You’ll find those dropped in as we refine and formulate ways to share information on this new site. Just a few of the article ideas we have been developing include the following topics:

We will provide both lengthy essays and single-paragraph stories about the WCE. We are anxious to have both feedback and questions, as well as information you may have to share with our readers. I continually find new information and long-sought-after verification of “facts” even after almost four decades of studying the WCE. We will talk about the myriad quasi-facts that are continuously quoted, both online and in print, and how gratifying it is finally after so many years to be able to discover even the most obscure but verifiable facts.

I am sure that a great many of those with an interest in the WCE have very specialized topics they study. We have encountered specialists in disparate segments of the fair and we will do our best to report on these as well as broader topics. Please do let us know the areas of your interest, regardless of how narrow that interest may be. For example, we know of scholars studying ethnology, sociology and anthropology at the fair relative to villages on the Midway as well as the collection and display of items in main grounds buildings; collectors interested  in just the first known appearance of souvenir elongated coins at the WCE; and examples of technology introduced by the likes of Edison and Tesla, among many others.

Studying the fair can provide the tiniest bit of information that may reshape one’s perception of a major topic or the narrowest of topics. We’ll bring them all to you and look forward to your comments.

We’re try to respond very promptly to question and comments, whether they are on the blog or via email (norm@thehistorybank.com) or phone (425-481-8818).

View all posts by normbolotin

6 thoughts on “Studying The WCE For Nearly 40 Years”